I recently decided to get a new laptop as my 2013’s Macbook pro was starting to fail from all sides (broken speaker, randomly working screen backlight, getting really slow), I wanted the following features for my new laptop :

Those are the tasks I want to be able to do on my laptop :

I considered the following options :

So I started to check for Chromebooks, the best option I found was the Asus Chromebook C434, I wanted at least 8GB of memory, a good and robust design, an backlight keyboard, so this one is the perfect match.

So I decided to order it, from the US as it’s a mess in France to get a QWERTY keyboard, I got very surprised by the build quality once received it, it feels very solid (Even more than the recent Macbooks). 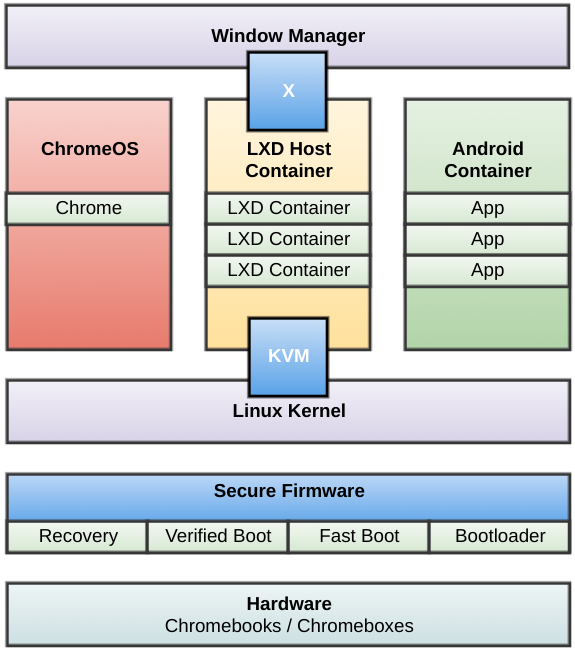 ChromeOS itself is a Linux distribution but you will not get access to the root account or even to a full shell (Except if you go to developer mode but that will basically shut most of the security systems and that’s not what we want).

You basically have 3 ways of running applications on ChromeOS:

As ChromeOS top priority is security, each of those subsystem is sandboxed from each others, it’s even more true for the Linux mode as you get 2 levels of isolation (LXD and KVM)

In this article I will talk about the the third one as this is the one interesting in our case.

First, let’s pick a quick text from the Google documentation:

Crostini is the umbrella term for making Linux application support easy to use and integrating well with Chrome OS. It largely focuses on getting you a Terminal with a container with easy access to installing whatever developer-focused tools you might want. It’s the default first-party experience.

The Terminal app is the first entry point to that environment. It‘s basically just crosh. It takes care of kicking off everything else in the system that you’ll interact with.

crosvm is a custom virtual machine monitor that takes care of managing KVM, the guest VM, and facilitating the low-level (virtio-based) communication.

Termina is a VM image with a stripped-down Chrome OS linux kernel and userland tools. Its only goal is to boot up as quickly as possible and start running containers. Many of the programs/tools are custom here. In hindsight, we might not have named it one letter off from “Terminal”, but so it goes.

Garcon runs inside the container and provides integration with Concierge/Chrome for more convenient/natural behavior. For example, if the container wants to open a URL, Garcon takes care of plumbing that request back out.

So we are already getting a lot of information, and you know what, as all this is part of the Chromium project, everything is open source and available for us to look at : https://chromium.googlesource.com/chromiumos/platform2/+/HEAD/vm_tools

When you enable the Linux mode (called Crostini) on the ChromeOS setting, ChromeOS will download a Linux image and start it with KVM, this container host is called Termina.

And you also get a Terminal application installed, I would not recommend using it much as it’s quite limited. You will quickly see that the installed container is in fact a Debian (9 at this time, but it’s easy to upgrade with the usual procedure) and of course you get full root access.

You can install without issue graphical applications like Visual Studio Code or another Terminal application (I use gnome-terminal in my case), and as Google do things correctly, you even have a GTK theme matching Material design installed by default.

However be careful when using some heavy GUI application, the GPU acceleration is still in beta (Like the whole Crostini) and not available everywhere yet.

From now you have your usual Linux shell and can setup everything you want and still have a great battery life.

So now let’s say you want something else than Debian, as this is standard LXD, you can use any image coming for example from https://us.images.linuxcontainers.org/

To do so, you need to start crosh that is the native ChromeOS limited shield, to do so, start Google Chrome and use ctrl+alt+t, you will get a terminal tab inside your web browser:

From there need to jump inside the Termina VM that is the LXD container host and we can already start using the standard lxc CLI and check for our default container running (The one you to go with the Terminal app by default):

So one thing you may want to do is being able to interract with LXD without having to go crosh then jumping to termina, good thing, LXD allows remote control, so let’s set it up so we can control it from our penguin container, we will need to spawn a temporary ubuntu instance to get a compatible LXC client:

Then on your penguin container:

There you should be able to control everything from your penguin container.

So far I didn’t had the need for another VM than the basic one, I do my full development workflow inside the penguin VM, but I understand than sometime you may want something different than Debian.

You need to know that by default you won’t have the same level of integration with others containers, like automatic integration of the desktop apps (They will appear in ChromeOS once installed like if it was a Gnome desktop) and shared folders between ChromeOS and your container, most of those features are available after some configuration on others containers.

So far everything is working fine, I do see some issues sometimes, with Jetbrains IDE typically, I get some random freezes on the whole ChromeOS, that should not happen and I reported the issue to the Chromium OS issue tracker.

Also as you know Chromebook are fanless and low-power computers, you may expect thermal throttling during intense compute (So if you plan to use Rust or Java… you’ll understand).

The fact that for now you can’t expose directly sockets to the outside world (Just to the ChromeOS host) can be problematic.

The USB limitation also make impossible the use of ChromeOS for SDR (Software Defined Radio) as the container will not see connected USB devices. (EDIT: See at the end of the article, there is a flag that allow to expose USB devices to the Crostini containers, but I could not make it work with everything)

Except that, everything is working perfectly fine, ChromeOS may finally be the Linux coming to the desktop reason ? And having this separated environment make mostly impossible to crash your whole computer because developers like to tweak everything. (And here you get snapshots for free on your containers by the way)

So at the end, about ChromeOS for developers/SRE :

But let’s remember that Crostini is still in beta, so hopefully most of those limitations will be fixed (in a secure way)

I hope you liked this article, feel free to comment, hopefully I will post more in the future about ChromeOS.

There you have some related links :